“Injustice anywhere is a threat to justice everywhere.” 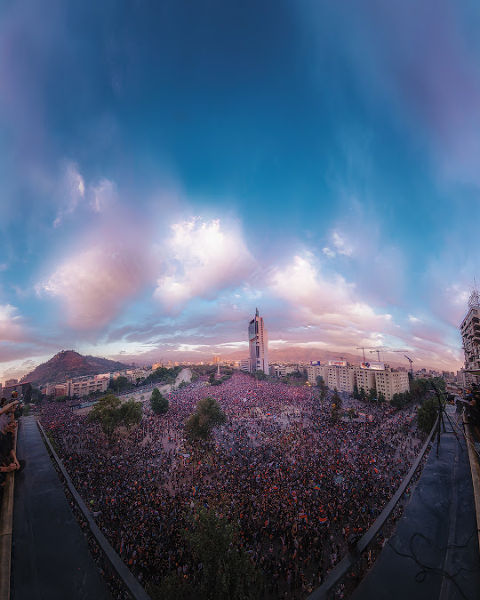 This past issue, however, was a unique one here at the magazine, as our monthly chocolate offer (and in particular our Chocolate Connoisseur Premier members) felt an impact from the events in Chile.

With a unique perspective from our Associate Writer Fernanda Bravo included here, coupled with these compelling photos from Juan Cristobal Lara, we felt the events in Chile were too important to not share this issue’s Editor’s Corner with everyone. Please feel free to share as you see fit.

In a very rare and unusual Editor’s Corner here, this issue’s segment highlights the intense situation that affected millions of people in October, including every single Chocolate Connoisseur reader, whether they knew it at the time or not.

After our In Focus feature on Natalia (Nati) Satto’s Wabi Chocolate in the September ’19 issue, associate writer Fernanda Bravo and I were working with Nati to set up our October-November chocolate offer here at Chocolate Connoisseur. Nati had been excited to work with us to help get the word out on her newest chocolate endeavor, and we were ecstatic to offer our second international chocolate offer of 2019 to all our wonderful readers.

With the basics essentially in place earlier in the month, as the deadline drew near for finalizing the offer I realized Fernanda had gone unusually silent for a handful of days, completely out of character for our international rock star writer. When I texted her to check in, Fernanda hit me with a bombshell… Chile, her home at present, was on fire.

In an American news cycle dominated by unusually insane (and that’s saying something right there) American politics, the news of protests in Santiago, the Chilean capitol, barely registered as a blip in most news feeds. After Fernanda raised the alarm, I dug past well over twenty other international news headlines to finally find a report on the situation in Chile. 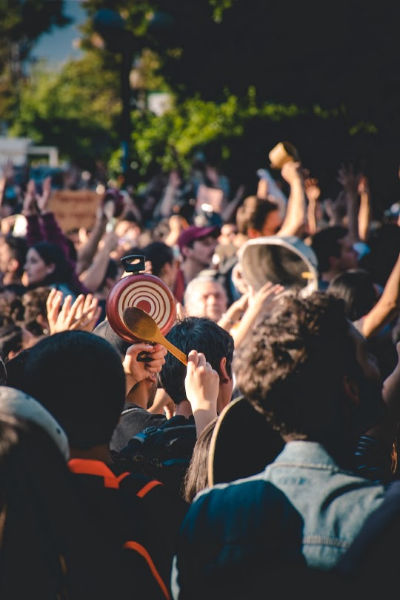 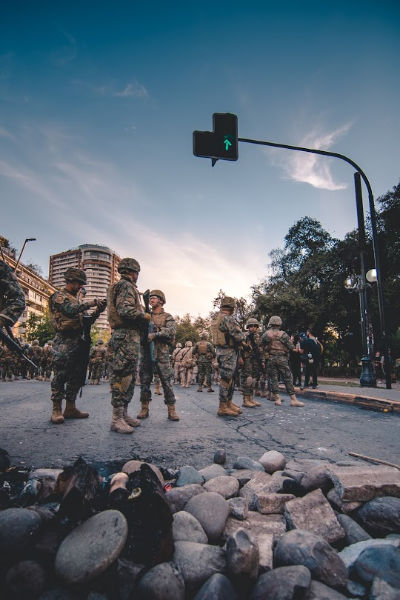 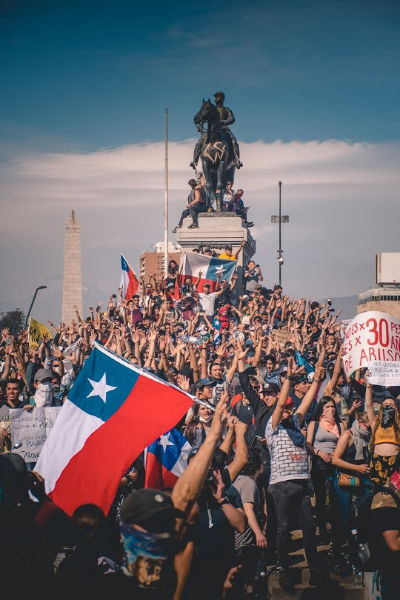 Sadly, the report offered little, especially when I had Fernanda in the thick of it letting me know events in greater detail than the news media cared to offer.

Regardless of any report’s origin, the simple truth is that civil dischord ripped through Chile like a hot knife through butter. The combination of a longtime income inequality and government actions set to worsen that inequality finally pushed some citizens to a tipping point.

“Protesters almost uniformly say they are frustrated with the so-called neo-liberal model that has left Chile with region-topping prosperity along with a widely criticized private pension system, and two-tiered health and education systems that blend the public and private, with better results for the minority who can afford to pay.

Many Chileans talk of waiting a year for an appointment with a specialist, or families receiving calls to finally set up appointments for loved ones who died months earlier. Hundreds of thousands are hobbled by educational loans that can follow them into their 40s and even 50s.

“Last Friday we had a peaceful protest and being peaceful they didn’t listen to us,” said Sebastián, a 25-year-old welder who declined to give his last name saying he feared authorities. “You have to get their attention somehow.”

Adding to protesters’ anger was a military crackdown on demonstrations and looting that has left 1,132 hurt, with dozens partially blinded by police or soldiers’ gunshot pellets, according to the National Human Rights Institute and the Chilean College of Medicine. The death toll from the 10 days of violence stands at 20, although it is unclear how many were killed by police and how many by looters.” 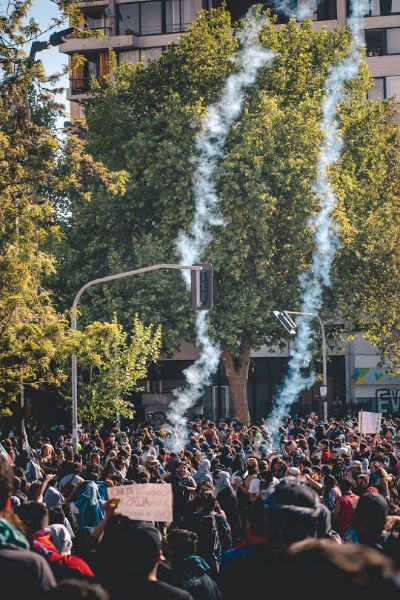 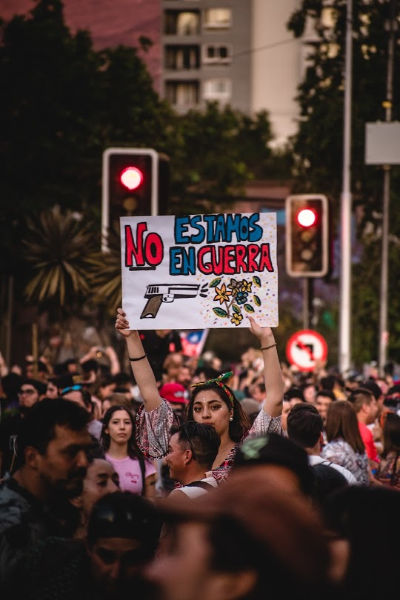 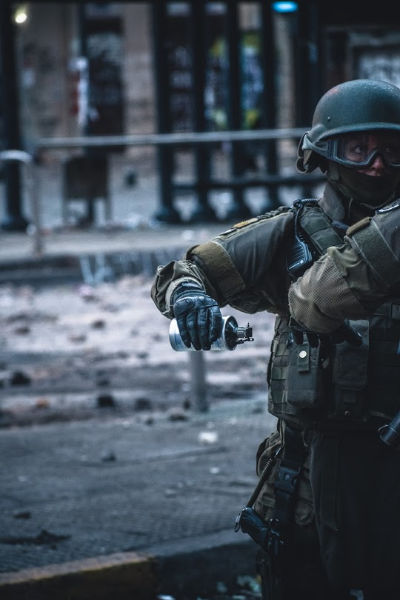 As Fernanda, Nati, and I discussed how to proceed with the Wabi chocolate offer, Fernanda relayed a story of a mail truck toppled and completely looted, and a post office now on lockdown. Although Nati’s chocolate shop itself is in Buenos Aires, Argentina, much of her chocolate making takes place in Chile.

She faced not only an issue of getting the cacao beans she needed to make her next batch of bars, but also the very real possibility that she’d have no way to even send those bars to Chocolate Connoisseur readers, and in particular Chocolate Connoisseur Premier members, who were scheduled to receive the first shipments of the offer less than a week later.

After all conferring, we decided together to postpone the scheduled Wabi Chocolate offer until the November-December offer instead, as an elevated level of stress and sadness underscored the entire situation.

I’ll get back to that in a bit, as we end this Editor’s Corner with some much needed positivity, but for now let’s stay in Chile.

Throughout the process, Fernanda sent me multiple voice texts, and I called her on multiple occasions as well just to check in. Even though she lived in a Santiago suburb, somewhat sheltered from the chaos in the city’s epicenter, Fernanda sounded shaken… uncertain.

When the infrastructure that supports your everyday life suddenly comes under fire, literally, your safety and security come under fire as well. 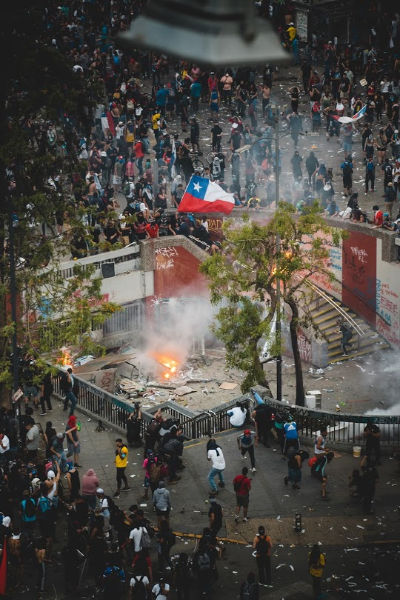 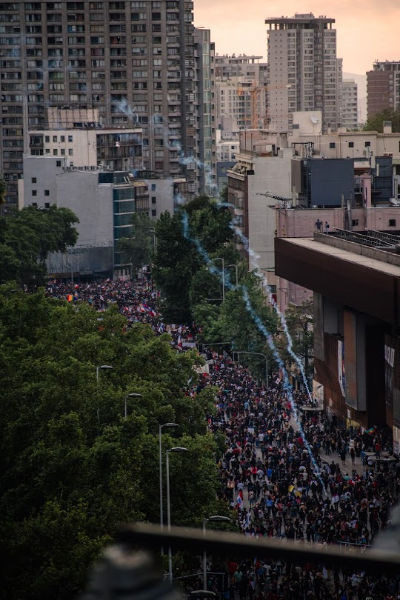 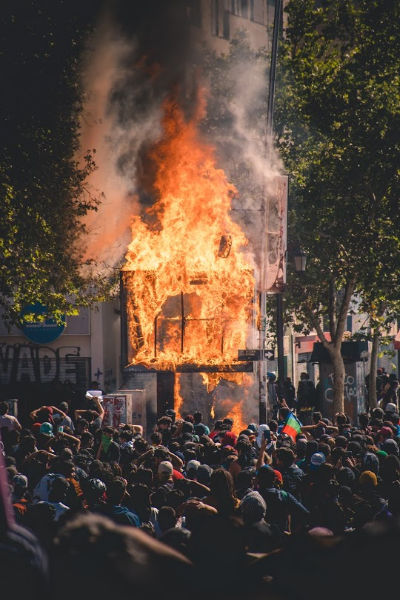 As we talked it through one day, I asked Fernanda if maybe writing about the situation would be therapeutic, also letting her know that this issue’s Editor’s Corner would undoubtedly focus on the Chilean situation, and I’d be happy to include her thoughts within it.

A week later, Fernanda sent me an email with a page and then some of her own thoughts on the chaos surrounding her, with this short note as well, “It was quite therapeutic. Best advice =) thank you.”

She also sent along some incredible photos from her friend, Juan Cristobal Lara, a well-known Chilean photographer who, as Fernanda put it, ventured “right into the middle of every protest, every day, capturing every moment.”

Now I’d like to take a moment to share some of Fernanda’s words, and Juan’s pictures, with all of you. We’ve highlighted multiple chocolate makers from around the world in these digital pages, and it’s important to remember that we’re all connected, both in times of prosperity and times of need as well. This next section is in Fernanda’s words only.

In a couple of hours, twenty million people occupying the same long land strip shared the very same feelings of anxiety and dread. As looting, fires, and massive riots spread through the entire country, it became hard not to classify people: in the blink of an eye, you’ve got an entire nation talking about the good and the bad.

Some would choose left and right. And others would go for the poor and the rich. This is all nonsense to me. There won’t ever be a worldwide political unity of belief. So, by demanding it we are only doing society a disservice.

No ideology can erase the reality of the world: it is of human nature the desire to satisfy our needs, whatever these are. And our nature will always demand more, no matter what political color you have or which part of the globe you live in.

Now half of Santiago has been burned down, and thousands of honest working people lost everything. Why? Because of both the rage of some violent hostile groups who decided to play heroes among an evident social crisis, punishing a complete city, and the long-time refusal of politicians to take responsibility in protecting the country’s poorest through the correct economic policies.

We usually look at economics/finance and society as separated schemes, and we tend to ignore the fact that this separation may profoundly damage any social organization. Too often, we lose sight of the whole – always greater than the sum of the parts – and this inevitably brings disastrous consequences. Chile is no exception to this rule. 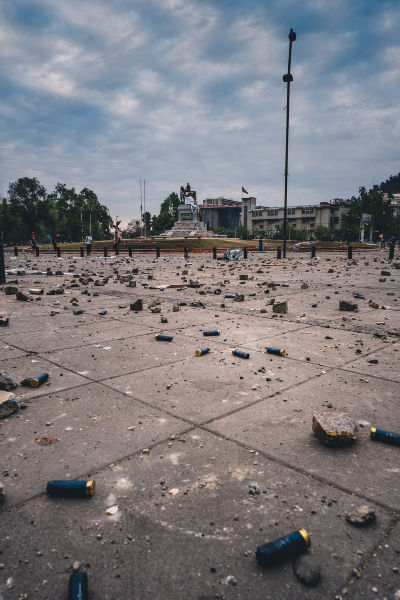 This eternal worldwide debate is not about Capitalism vs Socialism, because neither system by itself is sustainable at all. Economic policies must change along with the evolution of the society it serves.

They should be subordinate to humanist values and principles. They have a goal, which is sometimes forgotten: the maintenance of human prosperity and well being; otherwise, they become a futile collection of technical measures which will usually collapse amidst political tensions and social unrest like we’ve seen happen since forever.

It is true though that we are at a breaking point now. “Chile has awoken” was the motto during the biggest riot in the history of this country. Despite our so many differences, we can, and we will, learn to work together to build a system where love for people will be greater than love for money.

Ritual Chocolate Steps In To Save the Chocolate Day

As Chile slowly makes progress and things gradually calm down (it’s unfortunately not there yet at publish time here), let’s all send our good vibes, prayers, or whatever centers you spiritually to our friends down there. And big thanks to Fernanda for sharing her thoughts with us, and to Juan as well for sending over those photos!

Now, for the good news…

First, yes, the Wabi Chocolate offer will happen, whether it’s in late November or late December, it will happen. Perseverance rules the roost right now, on all fronts. 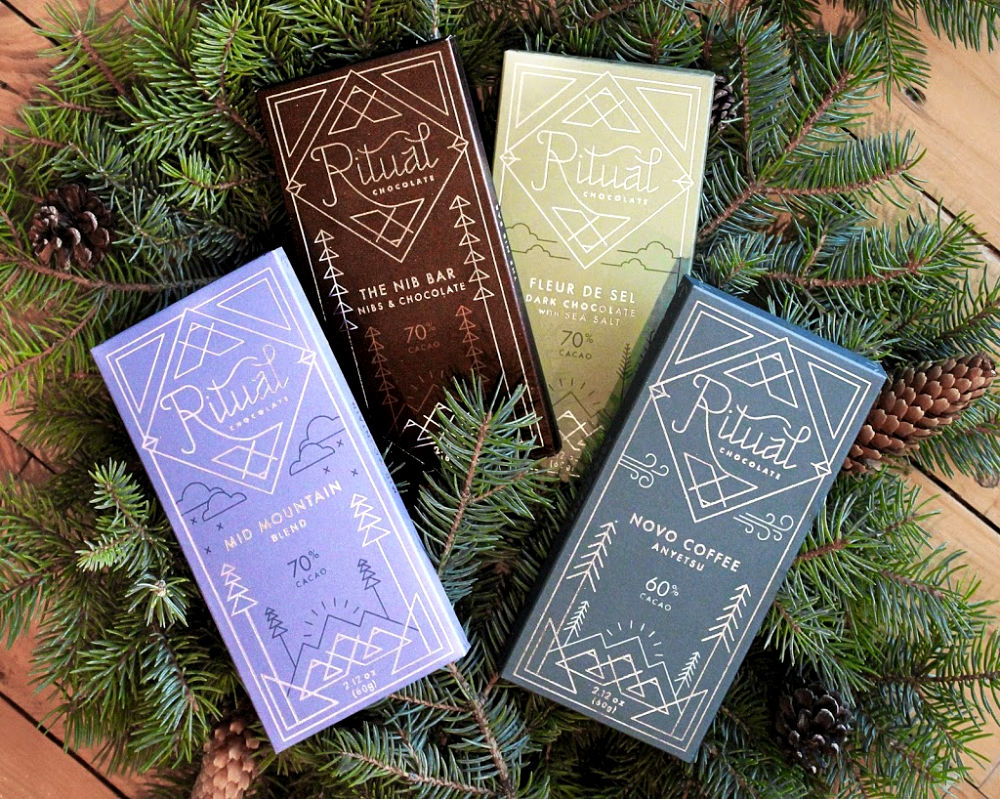 Second, HUGE THANKS goes out to Anna and Robbie at Ritual Chocolate for stepping in at the 11th hour to create your October-November chocolate offer!!! I called Katie at their media firm as soon as Fernanda and I hung up from finalizing the Wabi move, and within two days, we’d firmed everything up for Ritual to step in and fill the gap.

It’s moments like these that make you so grateful for living in the chocolate world. So many great people, and we all need to look out for each other as best we can!

With that, have a safe and Happy Halloween, a wonderful Thanksgiving filled with thanks for all the great things in this world, and hope that we can soon turn around the not-so-great things as well.

Much chocolate love for your November, and see you late next month! 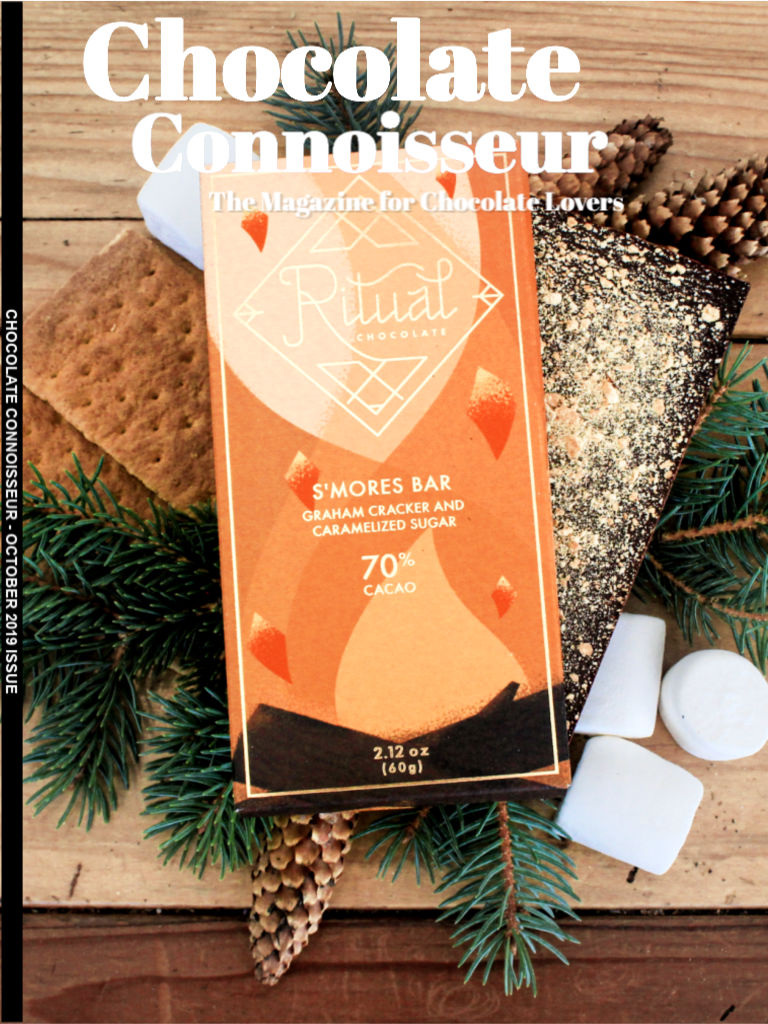 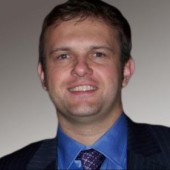 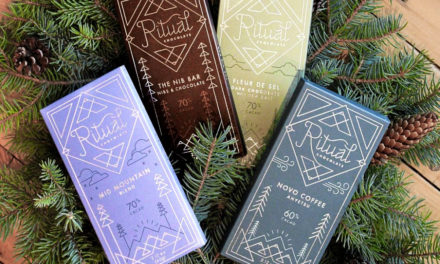 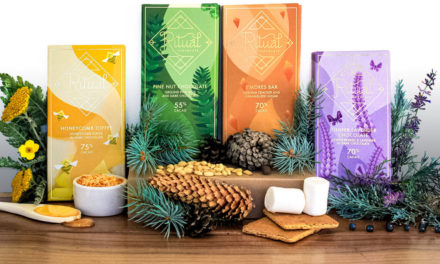 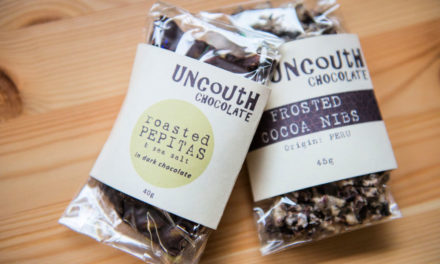 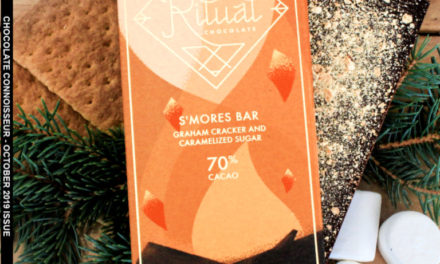